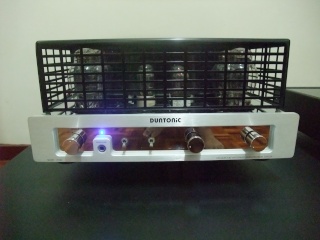 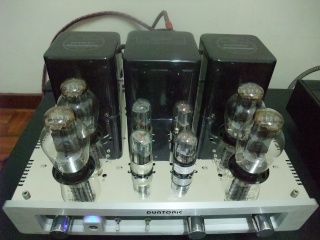 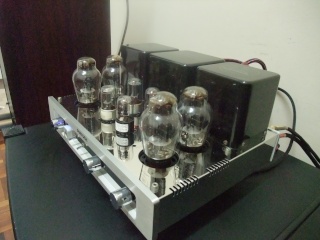 At the end of 2002, Audio Space developed a brand with the
name of Duntonic in its own plant. The early models included: DU-6i
(KT88), DU-3i (EL34), DU-2i (EL84) and DU-2.8i (6V6). Based on the
figuration, function and equipment of DU-6i as well as the 300B tube,
AS-6i began its trial sale with the name of Audio Space in Japan in
December of 2003. It was until April of 2004 was the same model of
Duntonic DU-6i (300B) available for sale in Hong Kong. Audio Space was
the exporting version which aimed at exporting to Japan, Singapore and
Europe. On the contrary, Duntonic was a version for sale in domestic
market. . After 80 panels of Duntonic DU-6i (300B) were used up, Audio
Space didn't manufacture additional panels. Moreover, it adopted the
mark of ?Audio Space? to AS-6i (300B) and introduced them to the
market. Any owner of the Duntonic-marked amplifier would have become
one of the collectors of these 80 sets limited version amplifiers.


As same as AS-300BMKII SE, AS-6i also adopts the tube of
6SL7×2+6SN7×2. Its powerful amplifying tube adopts two 300B for each
track, which is the same as MP-1B. The two 300B operates via split
convert phase circuitry to provide output up to 21W. Audio Space Lau
told me that this machine actually is capable of providing RMS power
output up to 28W, and the 21W was only a conservative figure. In
addition, he also told me that its low frequency could be increased to
10Hz-1dB with adoption of technology developed by Reference 1. In view
of manufacturing workmanship of 300B, the submerging capability of its
low frequency is really astonishing.